All week long, the markets have rallied back off of opening losses…just as we expected…with solid moves higher off of 21 dma, 50dma and 100 dma. Nothing about this market says “sell”.

Remember, April is historically the strongest month for stocks, with a 1.9% average gain going back to 1950 (with thanks to my friends at the Stock Traders Almanac).

End of quarter window dressing is here…lots of money coming into the market via tax planning/retirement plans…and once again, the shorts look to have been premature in their negativity. Take a look at this pretty amazing chart of the S&P 500 and market shorts. When the SPX was at its highs, short sellers hit their lowest recorded levels in this ETF’s history (we covered this exact phenomenon here in the VRA roughly 3 weeks ago). But all it took was a few days of selling pressure….now the shorts are back to 65% of their previous levels.

In today’s central bank controlled, funny money markets, in many cases the fuel for sharp reversals higher is short sellers covering their shorts (following brief corrections). I expect we’ll see more of the same for the rest of the next month, as end of quarter buying and short covering propel stocks higher, followed by an historically strong April.

The VRA System started noticing this last week….the internals began to improve on Thursday, and as of Monday, each major market had reached 80% oversold levels or greater. Let me put it this way…I would not want to be short here…at least not until the month is over and we see how the markets react as we enter April.

The chart below has 3 circles. What you’re looking at here is called an “inverse head and shoulders pattern” and it is considered to be one of the 5 most bullish chart patterns. The key is in the interpretation…as always…but I know these patterns well and this one absolutely looks legitimate to me.

Just the opposite of a “head and shoulders” pattern (which is highly bearish), inverse H&S patterns can propel an investment sharply higher and in a short period of time. The shoulders below are not perfect…they rarely are…but these line up very well. In addition, silver is now over its 200 dma….another big time bullish technical event. 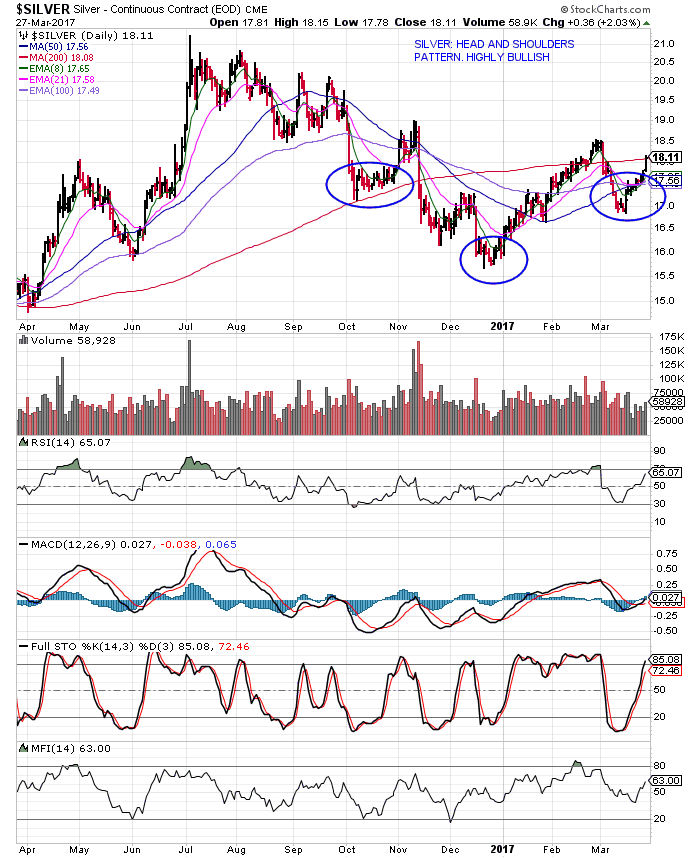 We also see that gold has surpassed its 50 dma and could blast through its 200 dma in the coming days. GDX is has struggled to stay above its 50 dma and folks, this is where the action is about to be explosive.

Think about what’s approaching; both the French and Italian elections (with the survival of the EU hanging in the balance). Will the US reach a budget agreement…or will the govt close down again? The talk will be just as we’ve seen in recent years “will the US default on its debt and other financial obligations”?

But more than anything, here’s what I continue to hear; the suppression of gold/silver pricing is coming to an end. Gold demand is soaring globally, with central banks, China, Russia and the Mid East accounting for massive demand.

Make sure you have solid positions in our favorite miners.

Finally, most every bear that I know is betting on a sell-off come Monday morning (end of qtr). But if we open higher, short covering could give us a big up-day….with a Tuesday correction, instead.

Until next time, thanks again for reading…

For A Limited Time You Can Get My New Book For FREE... Don't Be Left Behind. This Information Is Worth Thousands! Crushing Wall Street Since 2003